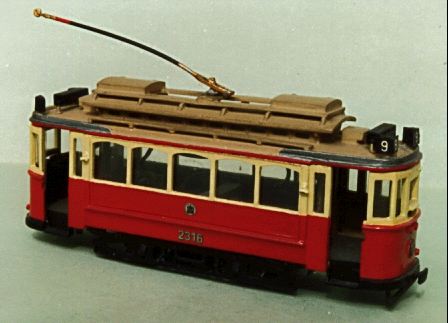 In 1894 the electrification of the existing horse-tram system in Hamburg began. This work was carried out at the Falkenried Wagon Factory and they manufactured all the electric cars for Hamburg up until 1936. During 1895-1896, they produced four cars per week, which was a high output rate, especially when one considers that mass-production was unknown at that time. The cost per car was then 22,000 Reichmarks. Production reached a total of 387 cars in 1897 when initial electrification was completed.

After the First World War, the entire fleet was in need of a major overhaul but due to the shortage of materials, the work was not completed until 1925. During this time, the cars received new longer 2.20 metre wheelbase chassis, new motors with an increased power output and lengthened, enclosed platforms. The livery changed from green to all-over cream and new numbers were assigned. Z1a, Z1b and "three-window" cars received the numbers 2052-2176 and 2202-2698, all classes being mixed together within these sequences.

During 1943 many cars were destroyed and in 1946 the Z1a class was reduced to 250. During the first few years after the Second World War, it was not possible to carry out a much needed general overhaul, apart from a change of livery to cream and red.

In March 1955, 92 Z1A cars remained in passenger service and these continued until 1959. The class was finally scrapped in 1961. The sole survivor is car number 656, which was originally built in October 1894. It was later renumbered 1588, then 2392 and finally 2300. This car has now been restored to its original unvestibuled 1894 condition as number 656 and may be seen at the Verein Verkehrsamateure und Museumsbahn site at Schönberger Strand, near Kiel.