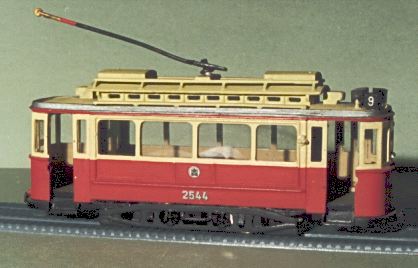 The development of the Z2 started towards the end of World War One. The main differences from the earlier cars were the increase in width to 2.20m and the number of windows being reduced to four. They were also fitted with improved Siemens motors and N5 2.00m wheelbase trucks.

In 1925 the Z2 cars were refitted with enclosed platforms giving total protection to the driver. The colour was also changed to cream. As the motors were not air-cooled, the cars were restricted to pulling one trailer.

From 1921 to 1925, due to the economic crisis, no new cars were manufactured by Falkenried. In 1926 production started again and 50 cars were produced with N6 2.20m wheelbase trucks. The cars were numbered 2699 - 2748. These cars had narrower metal window frames in place of wooden ones.

In 1943, 7 of the original cars and 12 of the later models were completely destroyed.

In March 1956, the front of car number 2548 was fitted with all-metal, rubber-framed windows with curved glass and low voltage equipment for the rail brakes and signals. In 1957 the rest of the cars were rebuilt to the same standard, being renumbered again to 2700 - 2751.

In September 1961, they rebuilt number 2730 back into a two-directional car. This remained in service until August 1963 with the number 2760.